Smoke from 2012 wildfires in Washington state a factor for wine quality?

This is interesting: Wildfires in eastern Washington last summer (2012) put a smoke haze over parts of the state for days. Smoke particles can come to rest on grape skins, and thus end up in the finished wine (I suppose the smoke could be rinsed off, but that is not practicable in the case of many tons of grapes and it could dilute the wine flavors, and if the smoke somehow binds to the grape then you have an unremovable flaw.

However, the Walla Walla wineries don't think they were impacted by this; I'm not sure where the smoke clouds were located.

Apparently the effects of smoke on wine will increase with the wine's age, so any damage won't be known right away. The damage would be worse with red grapes, where the smoke flavor could obscure the fruit flavors. However, since some white winegrapes are aged in burnt barrels (that's behind the name "Fume Blanc," for example), smokiness in a white wine can be a plus. And in a small amount it's just another beneficial flavor in a red wine.

We should know, over the next few years, whether and to what extent any WA wineries were impacted. Meanwhile, funding for remote firefighting is dropping, and the number of fires is increasing . . . 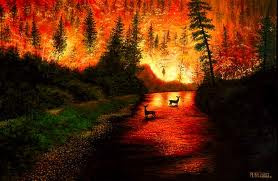 [photo credit: Al Feldstein. Amazing artworks of his can be seen here.
at March 07, 2013