Pesticides in Wines; this is another reason why we should move to hybrids!

(Source: The first part of this post is lifted verbatim from portlandfoodanddrink, which can and should be found here)

We’re all gonna die! Nine out of ten French wines contain pesticides. According to a study in the wine trade journal Decanter, pesticide residues were found in the vast majority of 300 French Wines. 90 percent of samples contained traces of at least one of the chemicals.

Some wines contained up to nine separate molecules, with ‘anti-rot’ fungicides the most commonly found. These are often applied late in the growing season.
…Since 2008, France’s Ecophyto national plan (involving the study of the ways in which organisms are adapted to their environment) has sought to cut pesticide use by 50% by 2018.

Encouragingly, all of the individual pesticide residues appeared at levels below limits set by the French environmental agency. But some samples turned up with as many as nine separate pesticides. And as I’ve written before, groups of pesticides may have so-called “cocktail” or “synergistic” effects—that is, a pesticide mix may be more toxic than the sum of its parts. As Pascal Chatonnet, head of the research firm that conducted the test of French wines, told Decanter, “There is a worrying lack of research into the accumulation effect, and how the [pesticide] molecules interact with each other.”
Plus, as Chatonnet pointed out to Decanter, “we should not forget that it is not the consumers who are most impacted by this, it is the vineyard workers who are applying the treatments.”
The class of pesticides that showed up most often were fungicides. According to Decanter, vineyards occupy just 3 percent of French farmland, but account for 20 percent of the nation’s overall pesticide use and 80 percent of its fungicide use.

A 2008 study found similar amounts in wines from Australia, South Africa and Chile. Interestingly, the author didn’t find any studies of the pesticide levels in American wines.
[Kenton writing:] The hybrid grapes (or "modern varieties") I'm working with don't need antifungal sprays in the PacNW. Thus, there is no chance of fungicide residue in the wines from such grapes. Yet another reason to switch from vinifera to hybrid winegrapes! 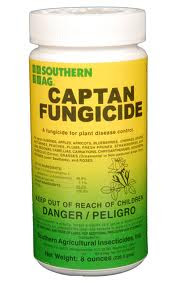