Expensive wine tricks our minds into thinking it tastes better

Thanks to Robert for this article.

You know what this means. It means we must work very hard to avoid being tricked into paying too much for wine. This is what I work so hard on--finding great wines at low prices. I think I have lost some customers over the years, who want to pay more for wines than most of the wines I offer. It's sad that they have bought so hard into the myth that most $50 bottles taste far better than most $20 bottles. I sell a few $10 bottles that have won major, major awards over much-more expensive wines. I even found a $7 wine (Chat St Michelle's Dry Riesling) that won Double Gold over wines costing twice as much, five times as much, even TEN TIMES AS MUCH. Just think about that.

Not sure about you, but I have better things to do with my money, than to waste it by overpaying for wines. Train your mind to work for you, not against you!

More on the Effort to Synthesize Wine in the Lab

Ava Winery studies the many chemicals in wine, and attempts to synthesize fine wine in the lab. So far, their best synth wines cannot fool the wine experts, who find the synth wines "off" in many ways.

Here's the article about it.

As a matter of science fiction, I wouldn't be surprised if someday all our beef, potatoes, and wine came from labs. Chunks of muscle cells can be grown in nutrient-rich tanks; probably potatoes are the same. And once we've mastered the thousands of chemicals in wine, why couldn't you just whistle up a synthetic wine equivalent to a 1948 Lafite?  I'm fully confident that, once the science is fully understood, such wine could be replicated. It could be an exact chemical match for the real thing.

Where would leave our descendants? Imagine a life with no farms, no vineyards. Few people will have to work, either, because most jobs will have been mechanized and humans will be paid a living wage, just for doing nothing.  Would we then turn to artistic and educational pursuits, or would be become even more lazy--perhaps doing little more than living in a virtual reality world where we can be sexy and athletic and wealthy. Maybe our poor health wouldn't matter then, because there would be medical machines to address any health problem. In that faux world, nothing would be real, except for the machines and the machines' products, and the humans so dependent on them.
at August 12, 2017 No comments:

I submit to you the word "fresh." You can be fresh with a girl (though fear not--I am not the type, I hope and think, to get too fresh with a woman, though I am the type to wax reminiscent for a time when "fresh with a girl" meant you tried to hold her hand, and you wanted to kiss her, but she didn't want you to, and so you didn't). But today I refer to "fresh" in regard to potatoes. Who knew? Yes, of course a fresh ripe fig or peach is remarkable (as certainly one cannot find such things in a store). Yet I am here today, my friends, to represent to you that "fresh" has significance even as to the lowly potato. Indeed, my fresh friendly faces, a newly-dug potato, when lovingly parboiled and fried in vegetable oil, with the right spices and care, can turn into something quite extraordinary. Quite extraordinary, indeed. One simply has to imagine Nirvana, and there you are. Why should a potato be considered any more common than a D-flawless diamond? You can't eat a diamond, or at least you should not. You can't fry a diamond, or at least you should not. Diamonds are not made more exquisite with the applicaton of ketchup. And yet one comes out of the ground with a $64,000 price tag, and the other comes out with hardly any value at all. Yet the value-less one giveth all the more pleasure. It yields itself up to instantaneous destruction, to bring you joy--can a diamond do that? In such paradoxy doth life reign. Good night. 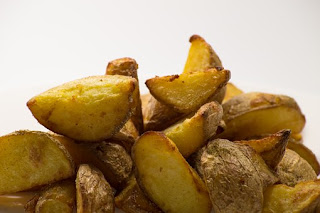 The major grape species of the world

There are eight major species of grapes in the world, and six are native to the USA:

Europe: Vitis vinifera, to which all the classical wine grapes belong.

USA:
1. Vitis rotundifolia: Muscadines--large flavorful grapes.  The best-known example is the Scuppernong. There is a Muscadine "mother vine" in North Carolina (see photo) that is hundreds of years old. I've rejected trying to grow these grapes here in the PacNW, as they would be (climatologically) so far from their Southeastern US home.

2. Vitis rupestris: The Sand Grape, it grows in warm prairies and sandy areas such as wet/dry creekbanks, in places like the Ozark hills of Missouri and Arkansas. As it is found principally on riverbanks, our practice of damming and draining wetlands has severely threatened this grape in the US.

3. Vitis mustangensis: The Mustang Grape is found in Texas, Oklahoma, and Louisiana, and has very acidic juice (acidic enough to burn my lips!).

4. Vitis labrusca: Best known for its varieties Concord and Niagara. This grape is the one used in Welch's grape juice or grape jelly, and its flavor is called "welchy" or "grapey." It does not make good wine.

5. Vitis riparia: The "Frost Grape" grows well in cold climates and is found from New England to Montana to Texas.

6. Vitis aestivalis: Called "bicolor" by grapebreeders due to its leaves' silver-colored undersides. Found from Maine to Florida, to Oklahoma and Texas. This grape is a parent of Norton, one of the best-known winegrapes bred in America, from only American grapes.

All these species of grapes have been bred with Vitis vinifera, to make modern varieties of grapes. The aim of grapebreeding is to create new varieties with the flavor of vinifera and the disease resistance, cold-hardiness and earlier ripening of the US grapes.

Cayuga is a great example. It tastes like a cross between Riesling and Viognier, with a taste profile that is very familiar to vinifera winelovers, and yet it has outstanding disease resistance (never needs antifungal spray) and ripens early, with huge yields of large clusters. It is currently my favorite white winegrape here in SW Washington state. Cayuga is 56% vinifera (including Zinfandel, a red wine grape, oddly enough), and some rupetris and other US varieties. It was bred in 1945 by Univeristy of Cornell at the Finger Lakes, NY, but not released until 1972. 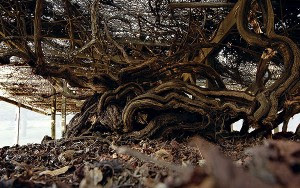 Photo credit: In the article, discussing the above grape species, found here.
at August 01, 2017 No comments: