Here are my thoughts re my 2017 big red Leon Millot, made in a big red style (I also make it in a deep rose style, off the skins, so the following is regarding its being made on the skins, in a style that ends up similar to Pinot Noir):

2. We added 5% white grapes, just as 5% Viognier is added to Syrah in Europe, to fix the color. I have never had Leon turn "Bricky" when I've added white grapes, and for some reason adding white grapes at that level does not seem to dilute the red color (at least not much, if at all). We used Blattner Epicure, and a little Monastery Muscat. I plan to plant one Lakemont white grape (dependable, heavy yield, fairly neutral flavor, and early ripening), for this purpose in the future, as I'm not sure about putting Muscat into my big red Leon, and I plan to use my Monastery Muscat in a Muscat rose (with Jupiter and NY Muscat, IF we decide to keep those two varieties).

3. I added Pectic Enzyme (to help break down the pulp), and tannin (Leon has little), and Yeast Nutrient (reduces the chance that a yeast will be stressed and produce H2S). Fermented on RC212 (a yeast often used for Pinot Noir, with which I see many similarities with Leon) for 5.5 days. Max temp (on heating pad) was 85F, which many Leon winemakers say is important for color fixing and for correct flavor extraction.  Once it reached 85F, I removed pads and blankets/towels, and it finished at 82F (it generates a lot of heat internally), falling to 78F at the end. RC212 needs 68F or more--always be careful to maintain no cooler than your yeast's minimum operating temp. I also didn't use a red extraction enzyme, because I didn't want to over-extract the herbaceousness in the skins of Leon. Note: Others are more adventurous than I am, with yeast choice and with enzymes; this is a personal preference with no right or wrong answers IMO.

I am devout about making a healthy yeast starter; have never had a long lag phase or a misferment, with my approach. I pitched at noon on 9-18-17 (78F starter, into 65F must), and sometime before 6am on 9-19-17 we had vigorous fermentation and good cap lift on the must. I am pretty sure that if I had just sprinkled yeast over the must, it would not have started ferm that quickly. I want to minimize the lag phase because wild yeasts and spoilage bacteria would eventually overtake the juice if the wine yeast is slow to begin.

4. At 8am on 9-20-17, I pitched MLF (Vineflora Oenos, freeze-dried white clumps--keep it in the deep freezer) on the 2nd day of primary fermentation, at 80F. Read up on the four things that MLF bacteria do not want; my approach works for me and I am reluctant to use a more-exotic MLF culture because (even though other varieties will produce a bit less diacetyl) Oenos is so robust and dependable for me, at least so far.

Leon can have a lot of Malic acid, so you can see a large increase in pH and a large decrease in TA, after MLF, in most years. I'm a bit confused now, because after 3 days (see #5 below) my pH is only slightly higher and TA is also barely higher; this is an odd result, but it might reflect slight differences in wine chemistry between free run juice and post-ferm pressed juice. Perhaps MLF just needs more time. MLF likes at least 65F, so instead of putting the carboys in the 61F cellar now, they are in my 68F garage (which will soon get warmer, with the coming two 80F days). The danger is that those higher temps, with no sulfite in the wine, could cause spoilage issues in the wine--the only protection I have against that, now, is the 13% alcohol in there, and the slight continue outgassing of CO2 from the yeast, which helps. Also, the pH of 3.66 is probably low enough to prevent spoilage in the face of 13% alcohol, but one never knows for sure. I can't add more acid (I would add tartaric, if the wine's TA was too low now) because TA is already 0.76% now, which is a bit high for a big red. I can lower that by about .05% during Cold Stabilization (CS) later, and if MLF is ongoing, that will lower it as well. My best guess is that MLF is only barely through its cycle so far. It can take a week or two even under ideal conditions. I hope to see TA fall to about 0.60-0.65%, before CS, ideally. If it falls more than that, I'll add tartaric to reach 0.60%.

5. Today, after 5.5 days ferm, SG-1000 with good lift of the cap (this sounds like full dryness but I read that there's still 1% of RS or so, at this point, and the still-lifted cap proves that ferm is still ongoing). The skins are a depleted, flat, brownish light purple, and all the pulp is gone, and the seeds are all loose. (The yeasts truly are like sharks). I pressed, using a nylon mesh bag in a sterile bucket, scooping must and wine out of the primary (44 gal white plastic rolling tank) with a plastic pitcher, and pouring it into a mesh bag which was in a bucket, then poured the wine from the bucket through a sterile funnel into the carboys. If it had been much more than 11 gallons of wine, I would use the bladder press. Now, pH is (temp-adjusted) 3.66, and TA is 0.76%.

​6. MLF should drop the TA by .15%-.40. I will occasionally retest TA, to see if I can satisfy myself that MLF is done. If my MLF doesn't finish (gets stuck), and if the wine chemistry is good, another advantage of CS (besides lowering the TA) is that at 25F, MLF bacteria are killed. And I can insert a bit more sulfite, on bottling (say, 75ppm rather than 50ppm), to also help guard against MLF restarting in bottle (that's a disaster for flavor; can ruin the wine). ​And carrying the wine a long time in carboys, through next summer, also provides the heat needed for MLF to perhaps restart and finish--another reason not to rush bottling (though I will sulfite once ferm is finished, and that reduces the chance of renewed MLF, but still I've seen it happen, as sulfite levels fall over time inside the carboys). I believe Leon (like apple cider) needs at least a 2 year production cycle, unlike Cayuga which is fine on a one-year cycle.

7. The Leon will get oak (medium toast; I like vanilla flavors) after it's calm and racked off the lees. I might stir the lees a couple of times per week; this can add body/mouthfeel, or maybe more-complex flavors. Lees stirring is called "battonage" ("Baton" is the French word for "stick").

now, THAT is a blue grape!

Look how populous my Leon Millot clusters are--with a super-healthy canopy. Don't adjust your monitor--these are blue-skinned grapes. And don't worry-those blue skins, through the mysteries of organic chemistry, indeed make a red red wine. We're only a few weeks away from harvest now, on these. I'm going to make half as a deep red rose, and the other half as a big, ageable, oaked red.

Leon Millot was bred in 1911, in Alsace, by Eugene Kuhlmann. It is early and healthy and productive here. Early enough that I don't have to hang nets and still don't get much bird damage. 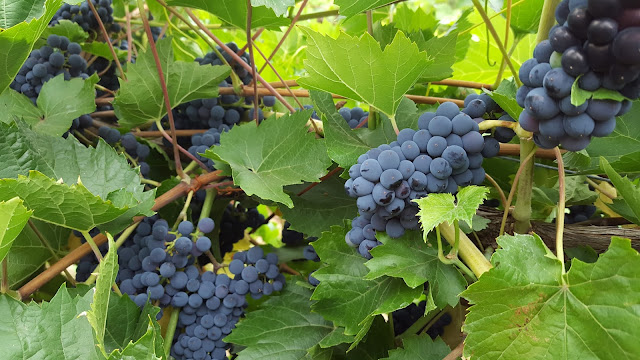 One of the more-confusing grapes must be the Muscat varieties. Here is some light shed on it:

1. There are about 200 varieties of Muscat grapes. All are varieties within the species Vitis vinifera.

3. It might be the oldest domesticated grape varieties. Nations claiming them include Saudi Arabia, Iran (Persia), and Egypt.

4. Muscats almost always have a strong flowery, musky aroma. (I love it.) This is caused by the presence of more than forty "monoterpenes," including  citronellol, geraniol, linalool and nerol. (You will recognize some of those as in such products as citronella candles, or geraniums. Linalool is a terpene found in various strains of marijuana. Nerol is new to me.)

5. Many languages are possible sources of the Muscat name: Persian (muchk), Greek (moskos), Latin (muscus), French (musc), and Italian (mosca, which refers to fruit flies, which are attracted to the grapes' sugar and musky aroma).

6. Here are some of the confusing parts:
a. Vitis rotundifolia (a grape native to the SE United States) is called "muscadines," though they have nothing to do with Muscat grapes.
b. The German winegrape "Morio Muskat" is not in the Muscat grape family.
c. The Bordeaux winegrape "Muscadelle" has strong aromatics and is often confused with Muscat grapes.

7. Muscats have been bred into modern grape varieties, through crosses with native American and Asian grapes. One of the many examples is Muscat of Norway, which some think is really Donskoi, a Russian-bred grape that can ripen in cold climates and thus somehow got named for Norway.

Here is the Wiki article on Muscat grapes.

Pictured is Muscat of Alexandria. (photo credit to Wikipedia) 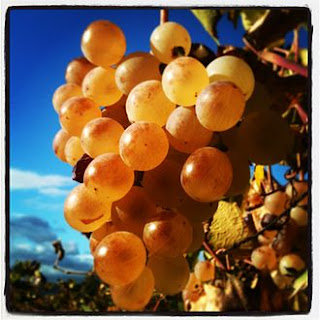