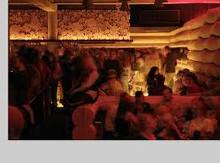 In our 13th year in Portland, we finally went to the Doug Fir lounge on East Burnside. Had $50 dinner certificate and two tix to the concerts afterwards.

Wow; this is a different place. I love it. For the schick of the restaurant, imagine that Stanley Kubrick combined a 1960's Elvis diner, and the set from the cartoon The Jetsons, and a teen rave, and you're pretty close. There is a devious hall of mirrors that masquerades as the way to the restroom. There are young and "pretty" people; lots of skin and tatoos. The waitstaff is cool beyond cool. This is a city place.

The food was very good. Farotto with veggies (a risotto-like dish made from farro) was excellent. So was polenta with sausages and grilled onions and peppers. So were the fried oysters. The food's also fairly priced--the entrees we had were $12 and $14. The bar is talented; we had an excellent blackberry cosmo.

The wine list is well-chosen for those on a tight budget. Makes little sense to take your own wine to the Doug Fir: We bought a Bogle Old Vines Zin (thank you, Kelly, for noting that wine to us many moons ago) for $22; it's probably about $10-12 at retail, so the corkage wouldn't save you much.

Downstairs are the new bands with ridiculous names and musicians that almost make up in effort what they don't have in talent. It was fun. We liked aspects of the music by Radiation City.

What an interesting place! If you go and you're over forty, try not to dress like it. For example, my feeble attempt to fit in was to wear a polo shirt with skulls and crossbones all over it. The maitre'd-ette nodded approvingly at my shirt, as we went in. Yes! Life is good ;)
at July 30, 2011 No comments:

1. The owners don't display critics' scores. Their reasons are (a) scores have crept up over the years, thereby having diminished importance; (b) the owners' palates differ from the tastes of most professional critics'; and (c) for some reason, younger wine drinkers are paying less attention to critic scores.

2. The owners choose only wines which they, the owners, like. This results (in their case) in a huge selection of wines from the Loire Valley, and a puny selection from Napa and Bordeaux.

I say Bravo! to this effort to chart an honest, personal course through Wine World. Chambers Street Wines sounds a lot like the old Square Deal wine shop here in Portland. Square Deal focused on littler, unknown wineries that the shop owners loved; my only issue with Square Deal (and I really liked the owners and their business model and their passion) was that my palate was so different from theirs that I really had difficulty liking many of the wines on their floor.

Apparently, that is not an issue for the steady stream of customers at Chambers Street.
at July 21, 2011 No comments:

A great wine for summer! Lighter body. Full fruit. Good balance. And it's only $7.99 (from me) for its 87 points from Robert Parker.