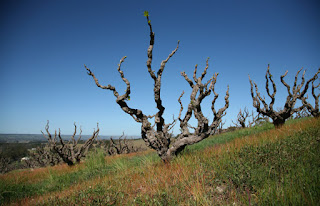 Wow. In the photo to your right, that is the Clarendon Hills vineyard, planted in the 1920's. This is 25 miles south of Adelaide, NE of McLaren Vale.

This book, by Wallace, is a very difficult read. It contains fascinating wine collecting tidbits and snippets, without being overall interesting. If you want to read it (for any purpose other than the need to put yourself to sleep), be warned: This book will bore you to death, but on some pages there are stories that will highly entertain you.
Still, why would such a clear charlatan not be called out sooner by the wine industry? If the owner of Petrus thinks that Petrus never issued a 1787 magnum, then why not publicly state doubts about the provenance of such a bottle? Why would a fraudster, who has gone to all the trouble to mimic the correct bottle, label and capsule, and has probably also put expensive 19th-century wine from the same chateau into an 18th century bottle, then use corks which are clearly not "original issue"?
Why would anyone who bought a bottle from the 18th Century, then open it?
Questions, but no answers . . .
at August 06, 2010 No comments: