Here is Spectator's list. The five Oregon wines are:

What we see, first, is that all the wines are Pinot Noirs. I think it's unfortunate that Oregon is best known for that grape, to the exclusion of some wonderful Chardonnays, Rieslings, Pinot Gris, and even (in the southern part of the state, and up near the Gorge and near Walla Walla) Syrahs, Merlots, etc.
The next point is that of that list, only one is what most folks would think of as a prominent, long-standing Pinot label, such as Beaux Freres or Domaine Drouhin, or Dom. Serene, or Ken Wright. Only Bergstrom is that. I barely know Evening Land and Solena, and I don't know Big Table Farm or Colene Clemens, even after 16 years of visiting wineries in the area. Congrats to the lesser-known wineries.
Next up for consideration is the vintage year: Of course some 2012 Oregon Pinots will prevail; it was a magnificent year. But look at Bergstrom's 2013 at #14 on the list! 2013 was a wet, disappointing year, and at Bergstrom they made the tough decision to harvest early, and ended up with this result. Kudos to Oregonian winemakers, who can create great results from mediocre weather. All Pinot enthusiasts need to applaud that kind of risk-taking and skill.
Finally, it must be said that:
a. All wines change, over time, in the bottle. I just finished my last 2009 Tamarack Syrah, which got 94 points Spectator, and it was spent, with no nose, hardly any fruit noticeable, and just not a pleasure to drink. And yet, just four short years ago it was a thing of magic. If Spectator re-sampled its Top 100 list today, I bet more than half of the honored wines would be replaced by something else.
b. Rest assured there are plenty of GREAT Oregon wines in the market, which didn't make this list. Any Top 100 list is going to create catastrophic sins of omission.  But we all love lists, so there you go. 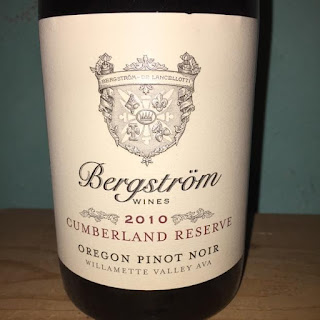