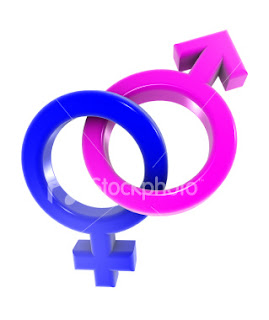 In non-enological matters (admittedly, a small topic ;), I would argue that there are far more similarities than differences, between men and women. One could even claim that the differences are so few as to be surrounded by the following statements:


1. Women need iron supplements and men don't (men tend to eat more red meat and they don't lose blood regularly).
2. Women and men have the same pituitary hormones, but in different ratios.
3. There are a few anatomical differences (such as, in the 1970's and 1770's, many men wore their hair longer than the women did. And such as, women do the whole PG, L&D thing, while men either smoke cigars outside or catch spears inside while marveling at the elasticity of the cervix).
4. Women are now achieving more in education than men are, particularly in college and grad school, but also in high schools. And men are paid more for the same job, in some places, but I think that may change faster now, given the women's advantage in school.

There. That's about it. The similarities include everything else, and it's a big world out there, so there are millions upon millions of similarities.

You think I'm wrong? OK--you wanna talk shopping? I can't stand the mall, but you should see me in a garden store, or with a wine catalog. Whether it's a young woman in the mall, or a 50-something guy in Home Depot's tool bin, shopping is really only research, isn't it? Or, you wanna talk about staying at home, versus pushing papers in an office? For the first time, there are more women employed than men in the US. Or, how about math and logic and using the left brain? There are plenty of women who prove every hour that those are emphatically not a male domain. And the number of men who know how to listen to their "feelings" is probably, oh, 100%, though maybe not enough of them know how to talk about it.

So why would wine be any different? I know some manly guys who prefer rose and white wines. Ditto for ladies who want a red so tannic it can curl teeth. Maybe more women than men prefer sparkling wines (aphrodisia is far beyond the scope of this note), but how often do you see a guy turn down a free glass of Moet Chandon?
at September 04, 2009