The Emperor of Wine's clothes 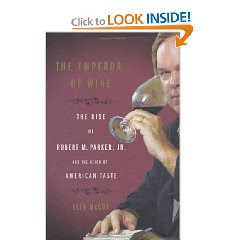 I recommend that you read the following article, on slate.com (if you're a subscriber):

The upshot:
1. Robert Parker and his fellow wine critics/writers have, allegedly, not always held to the high ethical standards that they have long espoused (standards, the widespread belief in which helped catapult them to the top of the world's wine review scene):
a. They have allowed people in the wine trade to pay for their trips;
b. They have allowed wineries to hand-pick the bottles to be tasted (if you have ever tasted a peach slice at a farmer's market, and then bought the supposedly same peaches, only to get home and find them much less sweet than the piece you tasted, you know what I mean);
c. He doesn't buy all the wines he tastes; this is economically understandable, but I think he used to claim that he never tasted wines that were given to him by the wineries.
2. A senior employee at KL Wines in San Francisco told me that Parker does NOT blind taste his wines. Allegedly, he knows beforehand what he's drinking. I suspect that is why the First Growths in Bordeaux tend to receive consistently higher scores than the others; one can only wonder how the scores would shake out if all the wines' identities were kept in cognito.
3. The internet, and the growth of massive numbers of amateur wine critics (ahem, like me, and, perhaps, like you) have blown the doors off the emperor's clothes, to mix a metaphor. This is all to the good: It will keep the great critics more honest. What we need is the benefit of their tremendous experience and tasting skills, unmarred by any resemblance of ethical impropriety.
at September 25, 2009