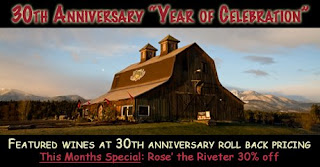 We found Olympic Cellars, totally by chance. It's in a converted barn on the highway between Sequim and Port Angeles. Where is that, you ask? Ah, it's not such a small world, after all, is it? It's on the Northern side of the Olympic Peninsula, where you might find yourself if you were taking the ferry from Port Angeles, WA to Victoria, B.C., to take tea with your spouse at the Empress Hotel, overlooking a beautiful city and bay.

Olympic Cellars makes the Working Girl label of wines, and we met one of THE Working Girls there, and she was, well, working. We greatly enjoyed these value wines, which I will soon offer to my email list, after a certain charity winetasting fundraiser is completed. The fruit is trucked in all the way from Walla Walla and Yakima. When we asked for a good spot for dinner, we were directed to Joy's Bistro. The Olympic Cellars winemaker, Benoit ("Ben-wah"), is Joy's spouse, and he was our waiter at Joy's, where we had a great dinner (in a ville that needs a few good restaurants). Anyway, Benoit was trained in enology at the University of Bordeaux, and he worked in some famous French wineries before coming here, finding Olympic Cellars in a remarkably out of the way place (seriously, how long since you've been in Sequim? ;) ("Squimm"), and falling in love. His presence there is your gain. Make plans to visit Olympic Cellars and eat at Joy's.
http://www.joyswinebistro.com/
http://www.olympiccellars.com/
at April 29, 2009