I've been reading about bottle shock. It's relevant because we just finished bottling our group effort 2012 Leon Millot (Epyllion Vineyard). I know that the wine is probably "off" in the bottle now, but after some time it will wake back up.

Pinot Noir is notoriously finicky with bottle shock, or perhaps there are other reasons that it varies in bottle from good to bad to good again.

But science has yet to catch up. What is bottle shock, what causes it, and how long does it last? Is there anything we can do to minimize it?

Articles about bottle shock are all over the map:

This is one of best articles I've found, from winebussiness.com.  But the range of advice is so vast that it only proves that many winemakers are totally clueless about bottle shock (or perhaps the author of the article missed some of their statements). E.g.,
a. Bo Barrett (Ch. Montelena) thinks that putting wine in bottle deprives it of the oxygen that it had received through the pores of the oak barrel, and the result is a growth of Brettamyces (a spoilage organism common in wines in varying amountst) in the bottle. Or,
b. Jeff McBride at Benziger believes that filtering the wine removes phenolic and color compounds which causes bottle shock and takes time to recover through the oxidative process (note: I do not see how removed wine components can recover with time; also, there is a lot of evidence that even sterile filters (with pores small enought to remove yeast) do not have any effect on wine molecules. Or,
c. Stefano Milgotto of WineTech (a mobile wine filtration service) thinks that the culprit is the addition of too much oxygen during the winemaking process. He thinks that filtered wine, right after filtration, sees a loss of varietal character (I would argue that it's not the filtration, it's the oxygenation during filtration, that is the issue.) And:
d. Gordon Burns of ETS Laboratories, seems to have it right: He thinks there is no one cause, but instead there are many root causes, some of which are not understood yet.  He thinks that if the free SO2 in a wine is stable, then bottle shock will be minimized.

Dr. Waterhouse, at UC Davis, says that little research has been done on bottle shock, and this is probably because most winemakers don't worry overmuch about bottle shock because it's always (or almost always) "cured" by passage of time.

He also says that, during bottle shock, bouquet (aroma) is lost because aldehydes are formed from ethanol in the presence of the added oxygen from bottling.

Dr. Boulton, also at UC Davis, thinks that peroxide is the culprit, not oxygen.

And, as to bottle shock associated with wine shipment (or even travel across town for dinner): This may be due to heating and cooling of the wine, which can move air (which is 20% oxygen) in and out of the wine bottle.

And this article suggests that six weeks is a fairly safe time to wait, to see the effects of bottle shock worn off. But some think it's worse with filtered wines, or worse with white wines. Clearly, more research is needed.

Bottom Line: Always let a wine mature before you drink it. This, BTW, is why many restaurants, in their zeal for cash management and lean inventory, commit a double cardinal sin when then offer wines that are too young to drink at prices that are 2.5x to 3.5x normal retail prices. You are overpaying for wine that is too young to drink. Take your own well-aged bottle to dinner, and pay corkage! 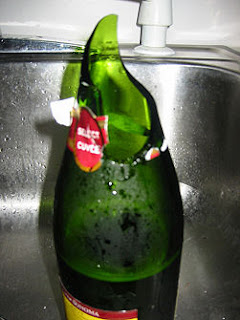