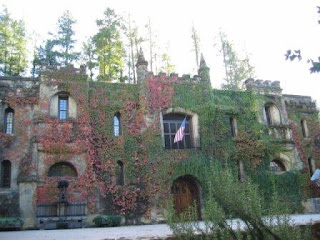 Just look at that winery! It was built in 1882--perhaps Napa Valley's first?--and has stone walls 12 feet thick in places. Famous for the 1976 "Judgment of Paris" in which its Chardonnay beat out the best French wines in a blind tasting, Montelena is famed for its cabs as well. So it was with great anticipation that I accepted David's very kind invitation to taste their reds at a event in which Montelena's Jim Barrett was the speaker.

Located high on Mt. St. Helena and in the high north end of the Napa Valley, it gets fogs and cool breezes spilling over from the Russian River Valley. This leads to night-time temps of just 50F, versus day temps as high as 100F, and that diurnal difference gives the wine more acidity, which you can taste. Also, we learned that not so long ago, wines would top out at about 8% alcohol, but the yeasts used today can push that to 12-15%, so wines have become much more powerful in the past few decades.

I thought their Chardonnay ($46 retail) was firm, fruity, and had good grip. The 750's can age for seven years. The '06 Zin ($27 retail; head-trained on 6' trunks and planted in 1972) was sharp with no nose at first, though later it opened to a nice bouquet. But it cannot quite stand up to one of California's super-zins, such as a Turley or a Hartford.

Then we jumped into the various estate cabs, from 1999 to 2005. I found some a bit acidic or thin. The '05 had a better nose than the other 2000's, with dark fruit and tobacco notes. The '99, though, was amazing: with an awesome bouquet, sweet tannins, and still tastes young.
I can buy these at Columbia Distributors, if you are interested.
at May 15, 2009 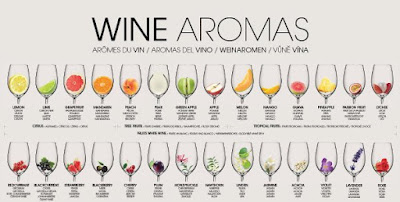