Tales of three vintages, no, four


This is taken from a great article by Andy Perdue, in Wine Press NW, about the climate for recent Washington and Oregon vintages. You can read that article here.

Washington State has seen three very challenging years in a row, for the first time since the 1970s. This wouldn't be unusual for the Willamette Valley, but in the desert of WA, the climate is consistently hot and dry for winegrapes, right? Not always.

2009: A great vintage for some WA plots, but an early freeze put an end to additional ripening at many vineyards. In Oregon, a very good year, following the great year of 2008.

2010: Springtime in the Evergreen State was cold, so buds broke late and the grapes stayed behind schedule all summer. Harvest ran late, which brings special issues to manage, but it was a happy ending with a record crop. Or so we thought, until a hard freeze before Thanksgiving decimated many vineyards which hadn't time to harden off for winter. (Let's face it, folks--vinifera vines are wussies compared to native American vines). The famed Horse Heaven Hills got it particularly hard. At Champoux Vineyard--where Quilceda Creek sourced some of its cabs--whole blocks of vines died.

In Oregon, it was a plague of starving birds which hit the vineyards during preharvest in 2010. The cold summer weather prevented the normal development of the quadrillions of blackberry vines upon which the birds had become so dependent. Over 20% of Oregon's grape crop was lost, and in some vineyards it was much, much higher than that. 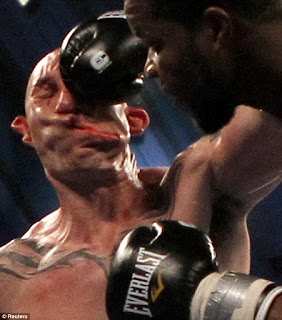 (that incredible photo of a staggered boxer is copyrighted by Reuters)

But as we've seen so often in the past decade, WA and OR winemakers are really getting a handle on how to cope with weird weather. Wet years in the Willamette can still produce good Pinots, for example, and Oregon's whites from the cold years of '10 and '11 can be superb (some say the 2010 Pinots are, too). The application of science, in the field and the winery, can undo some of Nature's damage in the field. Washington's wines from those three trying years were still quite good, as evidenced by their professional scores.

So as 2012 approached there was not a little trepidation. And Spring was cool, with budding a bit late. But summer was grand, with heat units off the charts (OK, much higher than average) for the Willamette and a great growing season was had in both states. Record harvests strained all available tankspace. Too early to know for sure, but it appears 2012 will produce many great wines in the Pac NW.

How could this not happen? Beer-wine hybrids are growing rapidly.

I think these are all instances of adding grape juice to the must before making beer. Chardonnay is a popular adder.

This might help alleviate the overplantings of grapes in some areas. It might introduce more-complex flavors than merely making beer with water.

Read about it here. 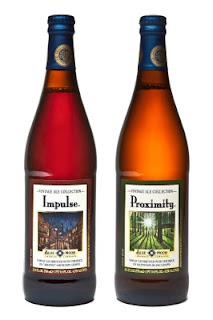 Charles Smith still on the way up

Charles Smith just bought the Whitman Cellars facility for just over $1M. (It closed a couple of years ago when its bank called in a $2.6M loan; I sold carsfull of the excellent Whitman wines to my customers after that, at great prices.)

Charles' brands are growing well. His Charles and Charles line is growing at a 30% annual rate. So the new space will be welcome. The photo below is him in his K Vintners tasting room. He also has a place in downtown Walla Walla, which is a wine store and nightclub/wine bar. I really like his wine style, and it's hard not to admire his risk-taking and his intellect, as well. 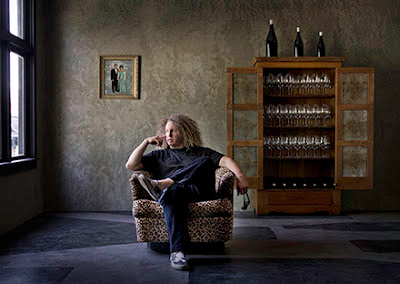 The owners of some of the "Critter" wines (best example being the mass-market Yellow Tail brand) are losing money, as the strong Aussie dollar makes it more difficult to sell the wines at low prices in the US.

So we can expect higher prices for Australian value wines, here in the States.

We poured about 1.5 oz for each taste, going through all the wines. Then there was enough wine remaining that we could go through the wines again. It turns out that the second pass of each wine revealed important changes as the wines opened up. Each wine easily added 10 points to its score, by being given time to open up.

The winners were the three most-expensive wines. Upon opening up, they were distinct in their own way and wonderful. Each had picked up some body and lots of complexity compared to its initial tasting. They are not like the lush, fruit-forward wines of Walla Walla, which so many of us here in Portland love--they are French, so you get a more-austere, lean, complex experience. We enjoyed unmistakable notes of chocolate, funky barnyard, creme de cassis, purple fruits, menthol. What a fun time!

Bottom line: When you drink fine Bordeaux, don't drink it all up until you've given the wine a half hour, an hour, two hours--as much as it needs--to fully open and strut its stuff. 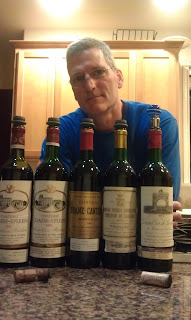 Not sure if modern varieties of grapes are more immune to these spreading fungal diseases, but this is a serious attack on older vinifera grapevines. And this is doubly tragic, as the older vines often produce the better wines.

These fungal diseases are called eutypiose and botryosphaeria. They cause sudden death of the vine. 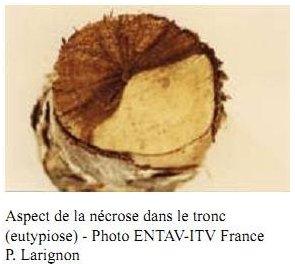