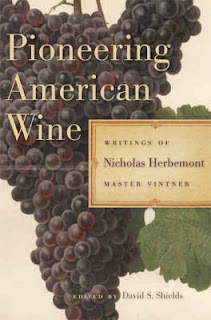 Europeans were encouraged by the abundance of wild grape varieties in North America, but when they brought over cuttings from (mostly Vitis vinifera) European grapes, the vineyards flourished for a year or two but then crashed to a complete and surprising death, due to American grape diseases. This went on for decades. What was a young nation to do?

Nicholas Herbemont (1771-1839; great name for him) was a native of Champagne, France, who settled in South Carolina. He developed what is still today one of the best counter-measures to the disease problem: He grafted vinifera onto American rootstock, thereby limiting the damage from phylloxera. He developed new trellising systems which allowed better airflow, which reduced the effects of certain airborne grape diseases. And he developed Euro/American hybrid varieties of grapes which resisted some of those diseases. He did all this in the early 1800s. It is not too strong to suggest that this kind of individual innovation is truly what made America a great nation.

He was the first American winemaker to make American wines in the French style, seeking the highest quality instead of the table wines that the Spanish mission friars and the other early American winemakers were making. He strove to introduce fine wine to a nation drunk on hard cider and hard liquor.

He said, "Where wine is found the most abundant, there is found the most sobriety." He was a gentleman scholar, an "ethicist," and a "cheerful philosopher." His mantra was "Deal honestly with the land." Wow; that was 200 years ago, before the likes of John Deere and Monsanto appeared to ignore him and destroy our topsoil, flora and fauna. There is a new book out about Herbemont, which would be a welcome addition to the library of anyone interested in early United States history.
at March 26, 2010 No comments: 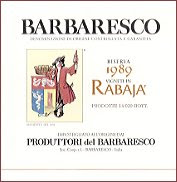 We attended a Barbaresco tasting this week, with Aldo Vacca, who is "Mr. Barbaresco." I spoke with him at length, and a smarter, kinder man (so patient with my questions) one could not hope to meet. If many Italians are like him, then Italy is indeed a wonderful country.
Barbarescos are made from Nebbiolo, as are Barolos, but those are aged longer and are more masculine. Barbarescos, however, are full-bodied and long-lived. They can be spendy ($40-$60 retail).
What did I think of them? I need to be careful here, because the winery owner, the food, our hosts, the other guests were all wonderful. The wines have good structure, with bracing acidity. They have plenty of tannin for aging. And yes, the wines went well with food and we were very glad to have tried them, but . . .
We are SO fortunate here, to have access to the many great wines of the Walla Walla, Tri-cities, and Yakima AVAs; I love the rich fruit and opulent bouquets that can be had in good cabs, syrahs, malbecs, cab francs from those areas . . . These Barbarescos (1996, 2001, and 2005) just didn't bring as much in bouquet and on the palate. They were a little austere compared to our bottles across the border. I wonder if aged Barbarescos from better years would show off a bit more. I wonder how Barolos compare to Barbarescos, and how Brunellos (Sangioveses) are different.
I should go to Italy, and find out!
Note: I learned that the soil in the tiny Barbaresco district is a meter of clay soil over very hard, compacted marl (limestone). When I asked if the roots were able to penetrate the marl, I was told no. I don't like the idea of grape roots' being limited to just three feet of topsoil. In Bordeaux, grape roots have been found to extend far deeper than fifty feet underground! Imagine the minerals that they have access to, way down there.
at March 19, 2010 No comments:

Are screw caps the answer? What is the question? 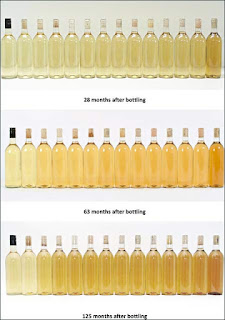 Just look at this picture.

Do you see the still-clear, still-young, still-fresh wine, on the left? Do you see the heavily oxidized wine on the right?
A study took the same wine, years ago (a Semillon), and bottled it using different closure methods: traditional cork, ply-cork (small cork ring glued onto a meatloaf of glued, pressed cork chunks), Syncork (plastic cork), and screw cap. Then, they aged the wines in the same cellar, for a few years.
Guess what? The wine on the left, which remained the freshest, is the SCREW CAP bottle. The ones on the right are the syncork, plycork, and traditional cork bottles. The corks apparently allowed faster inflow of oxygen, which can cause too much oxidation, a bad thing in the case of most white wines. Even if you drank up this wine after two years (the top row in the photo), you wouldn't want that bottle on the far right.

So, at least for white wines meant to be drunk within a couple of years, are screw caps better? Maybe so. I still shudder at a dinner we attended years ago in Tulsa, where the host poured a dark gold wine that should have been nearly clear. It was totally oxidized, undrinkable. The worst part was that the host said, "well, it's past its prime," and didn't pour anything else :-( .
But, it's not quite that easy. Other studies are finding a possible link between screwcaps and excessive mercaptans in wine. How would mercaptans get into wine? Winemakers are not able to avoid a small level of sulfides in the wine; it's a by-product of fermentation. One theory states that some oxygen transfer past the closure is needed, to keep these sulfides in their sulfide state; otherwise, without some oxygen, a reductive reaction can occur which creates foul-smelling mercaptans (rotten egg smell), which are arguably a bigger deal than TCA (which is easily detected and smelly, but is not harmful). Stay tuned.

As to red and white wines which are meant to age: for them, corks are OK in my book. You can't argue with the taste of a 30-year old First Growth Bordeaux. However, this study didn't consider the effect of TCA (cork taint, which arises from a combination of mold and chlorine, and can exist naturally on the cork bark or can arise in the winery). TCA allegedly impacts a fairly high number of bottles (up to 10%? although I haven't seen it, or maybe I don't/can't notice the slight cases). That is a tax that we should be less and less willing to pay, given the higher and higher cost of good wine. But, again, TCA doesn't seem to be bothering me.

Screw capping machines cost about $12,000, which puts them out of reach for all but the larger wineries. Someone needs to invent a simpler screw-cap system. How about a screw cap that can be just screwed on, with no machine needed? Now, THAT would be an invention! That is, IF screw capping turns out to be better, indeed.
at March 11, 2010 No comments:

Long Hand of the Romans

Dr. Carole Meredith of Cal Davis gives us this fascinating information, in a recent interview on saintsbury.com:

Pinot noir was developed by Celts/Gauls, from just one or two generations of wild grapes, in either SW Germany or eastern France. It was being grown in Burgundy when the Romans got there about 2080 years ago, and was at that time already recognized as a noble grape.

Chardonnay was not written about as a distinct variety until the 1300's and as the Pinot grouping (noir, blanc, gris, meunier) is one of its parents, it must be younger than Pinot noir. Chard's other parent is Gouais blanc, which may be the grape brought to the Gauls by the Emperor Probus in the 3rd Century, from Central Europe. Thus, Chardonnay was definitely developed (perhaps, at that time, it developed naturally, rather than being hybridized) in Burgundy.

When DNA scientists gets together with historians and archeologists, all kinds of cool things happen.
at March 04, 2010 No comments: