Gotta get me some of THAT!

Savor this description by Robert Parker of a 90-point lesser 2009 Bordeaux from Graves;

Please oh please, where can I get some of that? :-p

If the prospect of ash and scorched earth turns you on, here is the wine:
2009 Le Thil Comte Clary, Pessac-Léognan
at November 30, 2012 No comments:

Men's vs Women's Tastes in Wine

Turns out that men prefer Cab, Merlot, and Pinot Noir much more than women do. And the only wine that women like much more than men do is (gulp) White Zinfandel.

Women consume more wine than men, however, but spend less per bottle and are less likely to drink wine while alone.

Read about the study here. 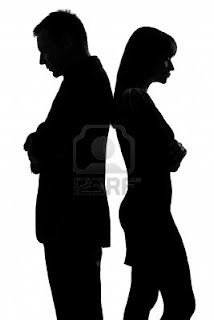 A new article points out that orchardists of all stripes are having more trouble finding farm labor to manage and pick their crops. The problem is causing losses for many farms as crops go unpicked.

One solution may be mechanized harvests. Easy for wheat, but very difficult for grapes and some other fruits.  It requires major changes in planning and practice, but perhaps as machines continue to develop in dexterity and nimbleness, we will someday only gaze over our orchards and vineyards as machines do all the work. Very Sci Fi, but . . . 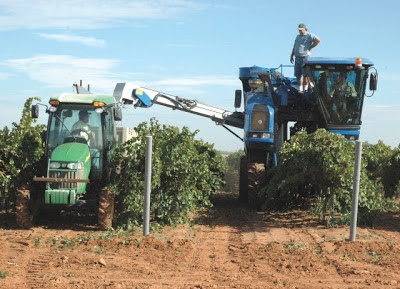 I lost some potted grapevines one year, to winter's cold. They just died.

But, I say, that is only true for vines in the ground. The trunk and canes ARE cold resistant, but when the grape is in a pot its roots are exposed to the bitter cold, whereas the grape in the ground has roots which are protected from the cold by the insulating earth! The tops are cold resistant, because in the real world (before came along humans with pots) that's the only part of the vine that needed to be. That is why your modern grape varieties, which are very cold-tolerant, can die over winter in their pots. Of course vinifera would do the same.

So, here's what I did, headed into winter in the Northland: I put the pots (not only my grapes but my bonsai too) in a spot where they'll get rain but be sheltered by two walls of my house, which should add a little warmth. Then I piled bark mulch all around the pots, as if mimicking a raised soil level, as if the vines were in the ground. Here's a pic: 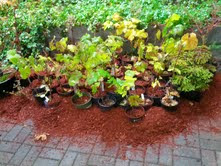 We'll see how it works. These vines are headed to my new rural vineyard, next year. They will grow on a gorgeous South-facing slope with great sun exposure, overlooking the pretty Lewis River.

The rise of modern varieties of winegrapes* continues:

Here is a good article describing how much a panel of wine lovers in California liked wines made from Marquette grapes in many northern states (Marquette was developed to prosper in cold climates).

The list of modern variety winegrapes that make good wine is growing. Each grape performs differently in different soils and climates, but for the PacNW, such a list might include (but is by no means exclusive--there are others, too):

Whites: Cayuga (and this one may be head and shoulders above the others), Interlaken, Traminette (if it ripens quickly enough), Esprit, Briana, Jupiter, New York Muscat (the last two make Muscat-style whites)

Notes:
1. These are crosses of Vitis vinifera (French winegrapes, which have great flavor for wine) and American grape species (which have more disease resistance and which ripen earlier). It is old-fashioned crossing--putting the pollen of one grape on the uva (egg) of another, and a few years later you find out what you've got (because it takes a few years for a grape to mature enough to bear fruit). Sometimes (including lots of additional crossings--each of which takes more years) a terrific new variety is developed.

2. Some call the modern varieties "hybrids," but that term  is perjorative to some people, as "hybrid" is a synonym for "bastard," "crossbreed" and "mongrel." Hey, we are all mongrels but the term is negative.

3. Why the push for modern varieties of winegrapes? Because they are so "green." They don't require fungal sprays (unlike vinifera, which require so much spray that Europe is considering regulating their spraying. Even if the grower uses organic sprays, it still requires a lot of tractor fuel to apply all those sprays). They ripen earlier, which is an advantage in the PacNorwest (it's more likely to beat the Fall rains and it can even sometimes avoid the predations of birds, without having to install nets).

4. I choose not to grow Marquette because it has very high acid and thus is much more work in the winery. Ditto with Baco Noir.

Not exactly a dearth of new wine, but:

The drop was due to poor weather in Europe and to vine removals in some parts of the world. That's interesting, because there are places where arguably too many vines are being planted.

Pinot Noir is on just about everyone's "very short list" of the greatest grapes (along with, most likely, Cabernet Sauvignon, Syrah, Sangiovese, Riesling, and Chardonnay). But Pinot is infamous for being ephemeral and inconsistent: It varies from one bottle to the next, and it can even vary from month to month. It is more difficult to grow and to vinify. It can disappoint, or exalt, and you never know which until you pull out the cork. Personally, I do not appreciate the "what will I get?" aspect of Pinot Noir (or, stated another way, I prefer a baseball batter who hits lots of singles and doubles, compared to one who strikes out a lot but also hits a few home runs). However, I agree that, at its best, it is the greatest grape on Earth. However, it's a shame that we don't get to see it at its best very often. It's also a shame that Pinot is so expensive, but that is mostly because the variety loses its varietal character if it's overcropped--and thus, much of the fruit must be cut off and discarded while still green. This drives up the cost of the wine, obviously, because the yields are lower.

There are two fundamental styles of Pinot Noir:

1. The classic French style: thin, watery, often with weak color, with subtle flavors and suppressed fruit. For reasons I do not fully comprehend (other than Gallic tradition and dominance), this is the most popular PN style, and it is growing in prominance.

Kosta doesn't grow any grapes. They make Pinot from other people's grapes, in a warehouse. Their expertise lies in skillful blending. Their wines sell for $52-$72 and are typically big and fruit-forward, though not too hot (alcoholic). There are over 10,000 people who are waiting to get on their mailing list.

Littorai (Latin for "coasts") loses points with me because it adheres to one of the greatest hoaxes of all time: Biodynamic farming. The only science behind it is that which can be easily gained by studying organic farming practices, which predate the Biodynamic farce and which are well-supported by science and proved in the field; all the rest of Biodynamic farming is hocus pocus dreamed up by a snake oil salesman who knew nothing about botany. Wineries, and their consumers, should be embarrassed to fall for it. Littorai's wines are lighter-styled but reknowned for rich berry and earth elements.

In Oregon, we are heavily influenced by the great Domaine Drouhin winery, which of course was begun pretty long ago now, in an epic move here by the historic Drouhin family of Burgundy fame. I think our wetter climate probably lends itself to the classic style, as well.

I am sick of all the mediocre Pinot being made in Oregon. The great bottles are fantastic and the skill of their makers is remarkable. But there is just too much Pinot Plonk here, too many pretenders. The variety's seen a  quadrupling of acres planted in the past decade, and a lot of that is being made into poor quality wine.  We shall see what the market thinks, over the long term. Meanwhile, YOU should see which style you prefer.

Portland, Oregon saw 2625 Growing Degree Days this year, which is quite a bit above average. The Fall was long and mostly dry; it allowed the luxury of picking on flavors. We had a record-dry July-Sept quarter. Some unirrigated grapes at harvest were shriveled from lack of soil moisture, which can lead to high alcohol wines. But overall, a very good vintage and I expect many high-quality wines.

My higher vineyard saw fewer GDD's, probably around 2300 (because Hillsboro saw 2025, and we lie between the 'boro and Portland's West Hills weather station). But that was enough to ripen many tomatoes with great flavor, and even some peppers got ripe this year. Funny--in Houston we had ripe tomatoes by May! and in Portland we're lucky to get them in August.

Rollin Soles, a very friendly and talented winemaker from Texas, has been making wine at Argyle for many years. A few years ago he started Roco, his own place.

Now they're opening a new tasting room, and Spectator gave one of his wines 95 points! Pretty high score for an Oregon Pinot; not many have scored so high.

You can read about all that here.

Bennu Glass started making wine bottles in August in Kalama WA. They hope to ramp up production to 100 MILLION bottles per year in coming years. This is a restart of a failed wine bottle manufacturing effort that went bankrupt a few years ago due to repeated and expensive problems with the melting machine.

Pretty cool. If I ever start up a winery near Woodland, it won't be far to get bottles!

Amazon.com is starting a service that will allow small wineries to reach more customers. If I understand the terms of the program, it really stinks for the wineries and I hope they will stay away from Amazon in droves:

Amazon will list the wines for sale, but the wineries must handle the shipping and legal compliance (not a slight matter, as the wine laws differ in every state). The wineries have to pay Amazon $40/month AND 15% of their sales. It is difficult to imagine a worse deal than that, for the wineries. If Amazon handled shipping and compliance, that would be different.

In contrast, wine.com opened an online wine marketplace; shoppers can pay $49/year for unlimited wine shipping; I'm not sure of the terms for the wineries, although they have to ship their wines to wine.com distribution centers.

The article about this is here.